Hi everyone! Today I’m here with yet another Celebrate Lit blog tour, for Dani Pettrey’s book, The Crushing Depths! I reviewed the first book in the series, The Killing Tide, a couple months ago, and I’m excited to review this one too! Because this is a Celebrate Lit tour, there’s a giveaway associated with this post, so make sure to check it out! 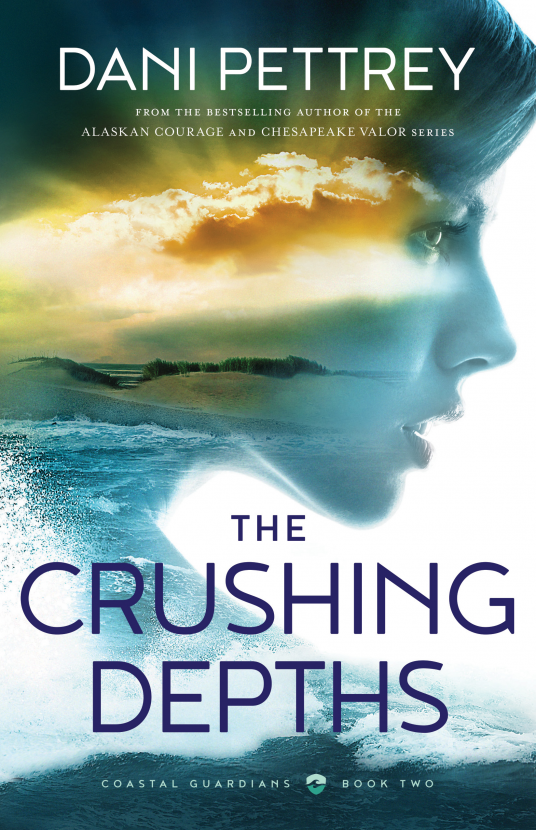 They know the power and peril of the ocean.
But as they get closer to the deadly truth…
An even greater danger lurks just beneath the surface.

When an accident claims the life of an oil-rig worker on the first drilling platform off the North Carolina coast, Coast Guard investigators Rissi Dawson and Mason Rogers are sent to take the case. Tensions surrounding the oil rig are high and the death has everyone on edge. Environmental activists are threatening to do whatever it takes to stop the structure from being completed, while rumors are being whispered about ancient curses surrounding this part of the ocean.

Mounting evidence shows the death may not have been an accident at all. Was he killed by one of the activists or, perhaps more frighteningly, a member of his own crew? Rissi and Mason have to sort through not only a plethora of suspects, but also their own past and attraction to each other.

Just as the case seems like it’ll break open, worse news arrives. A tropical storm has turned their way and soon they’re cut off from any rescue–and right where the killer
wants them. It’s a race to discover his identity before he eliminates the threat they pose.

Previous books in this series:

I enjoyed this read! It wasn’t my favorite, but it met my expectations and was a fun book!

This is book 2 of a series, and like many Christian fiction series, the main characters are two that were introduced in book 1. The main characters in this one are Rissi and Mason, who were introduced in The Killing Tide (at least, I know Rissi was in it; I’m not sure about Mason). I really enjoyed their romance and getting reintroduced to each other: they were so sweet and it was so fun to read. Like the previous book, the two main characters already had a relationship, and they also . . . kissed a lot? Nothing /too/ visual, but definitely the hands-in-hair, back-against-the-wall, his-mouth-enveloped-her-mouth kind of kiss which . . . was kind of a lot? I didn’t mind it but I know a lot of people who read my reviews might, so I wanted to put that out there.

In terms of the actual suspense plot line, I liked it a lot better than in The Killing Tide: the scenario seemed a lot more believable, and the amount of people involved seemed adequate for the situation (whereas in the other book, it felt like 7-10 people solving a case of that magnitude was a little unrealistic, and for me it required a bit of suspension of disbelief). I enjoyed watching people from various fields working together to solve the case, and my favorite was probably Austin, the lawyer! She was just . . . REALLY COOL.

I really enjoyed Rissi and Mason’s backstories though! I wish we could’ve heard more about it, especially since it’s such an heavy and deep topic that has a lot that can be discussed. Instead, most of the discussion just skirted around the topics that could’ve actually been really nice to have unpacked.

Praised by New York Times best-selling author Dee Henderson as “a name to look for in romantic suspense,” Dani Pettrey has sold more than half a million copies of her novels to readers eagerly awaiting the next release. Dani combines the page-turning adrenaline of a thriller with the chemistry and happy-ever-after of a romance.

Her novels stand out for their “wicked pace, snappy dialogue, and likable characters” (Publishers Weekly), “gripping storyline[s],” (RT Book Reviews), and “sizzling undercurrent of romance” (USA Today). She researches murder and mayhem from her home in Maryland, where she lives with her husband. Their two daughters, a son-in-law, and two adorable grandsons also reside in Maryland. For more information about her novels, visit www.danipettrey.com

To celebrate her tour, Dani is giving away the grand prize package of a necklace, tumbler and a $50 Amazon gift card!!

Be sure to comment on the blog stops for nine extra entries into the giveaway! Click the link below to enter.

For more information about this blog tour, and an exclusive recipe from the author about The Crushing Depths, as well as more stops from the blog tour, click here.