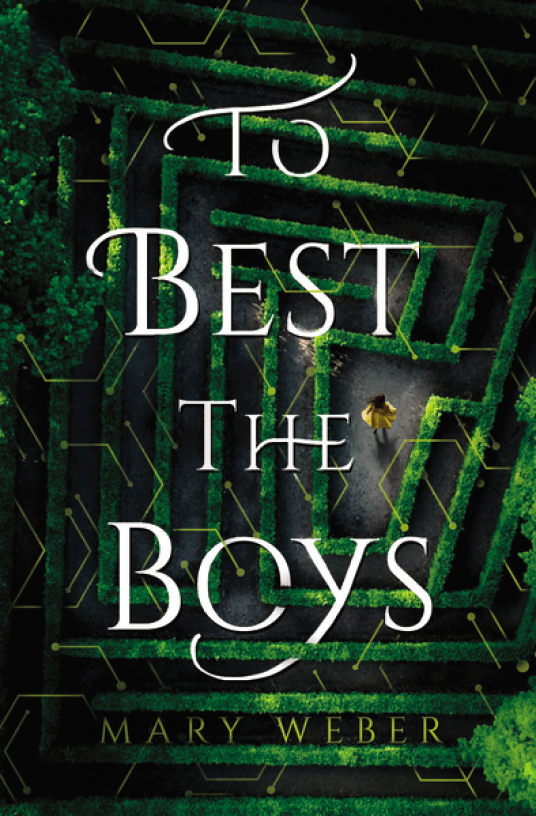 The task is simple:
Don a disguise.
Survive the labyrinth.
Best the boys.

In a thrilling new fantasy from the bestselling author of the Storm Siren Trilogy, one girl makes a stand against society and enters a world made exclusively for boys.

Every year for the past fifty-four years, the residents of Pinsbury Port have received a mysterious letter inviting all eligible-aged boys to compete for an esteemed scholarship to the all-male Stemwick University. The poorer residents look to see if their names are on the list. The wealthier look to see how likely their sons are to survive. And Rhen Tellur opens it to see if she can derive which substances the ink and parchment are created from, using her father’s microscope.

In the province of Caldon, where women train in wifely duties and men pursue collegiate education, sixteen-year-old Rhen Tellur wants nothing more than to become a scientist. As the poor of her seaside town fall prey to a deadly disease, she and her father work desperately to find a cure. But when her mum succumbs to it as well? Rhen decides to take the future into her own hands—through the annual all-male scholarship competition.

With her cousin, Seleni, by her side, the girls don disguises and enter Mr. Holm’s labyrinth, to best the boys and claim the scholarship prize. Except not everyone is ready for a girl who doesn’t know her place. And not everyone survives the deadly maze.

Welcome to the labyrinth.

Like most of the book reviews I write, this book is by an author I’ve been wanting to read for FOREVER and just haven’t gotten around to yet! As the release date for To Best the Boys is coming up, I figured I’d give it a shot, and EEEEEEE the hype for Mary Weber did not disappoint!

The people who said that this book was like a combination of Caravel and The Scorpio Races were spot-on: it was a The Scorpio Races setting (especially the mostly realistic, but with ~special~ creatures bit), with the labyrinth bit being a lot like Caravel. And since I loved both those books, it stands to reason that I loved this one too!

Her cousin Seleni was another important character in the story: she was also brave and daring but she /liked/ frills and dresses and /wanted/ to have babies and DIDN’T want to go to uni, and the story made the distinction that both of them were OKAY!

And the boys!!! Lute and Beryll (but mostly Lute, of course) were such great gentlemen, and Lute IS JUST PRECIOUS, okay?? Also Vincent is a literal piece of garbage #ooF. I really really enjoyed how the relationships were already there, so it wasn’t like “oh, they met in the maze and now they’re kissing” it’s more like “oh, we’ve liked each other foREVER and like OOPS WE KISSED” and if you’ve ever read any of my reviews, you’ll know that I LOVE THAT!!!

Another thing I really liked about this book was the distinction between the upper-class and the lower-class. The people putting in regulations, and the politicians (a big @ VINCENT), and the fishermen, who are just tRYING THEIR HARDEST to live and make a living.

The disability rep was also so, so good in this book! I did not expect a book that seemed to be set in the 19th/20th (ish) century, to speak about disability (namely, autism, down syndrome, dyslexia) so kindly, and so well, and I loved that!

Things Liked-
-RHEN!!! She gets her own bulletpoint for being a badass
-Also 12/10 feminism rep
-and the other characters: Lute, Beryll, Rhen’s dad, Mr. Holm!!
-The light–and apt–romance!
-SCIENCE THINGS–it made me not want to change majors lollll
-Disability rep!
-Being like two of my favorite YAs, like, EEE
-It was such a cool setting!! looking at it holistically it really doesn’t make sense, but it was described so well that it worked!
-also that writing style was so smooth and clear and beautiful I LOVED IT!!

Things Disliked-
-some of the endings seemed to tie up too nicely?

Thank you to the publisher, Thomas Nelson, for providing me with a complimentary e-copy of this book via NetGalley in exchange for my honest review; I was not required to write a positive review.