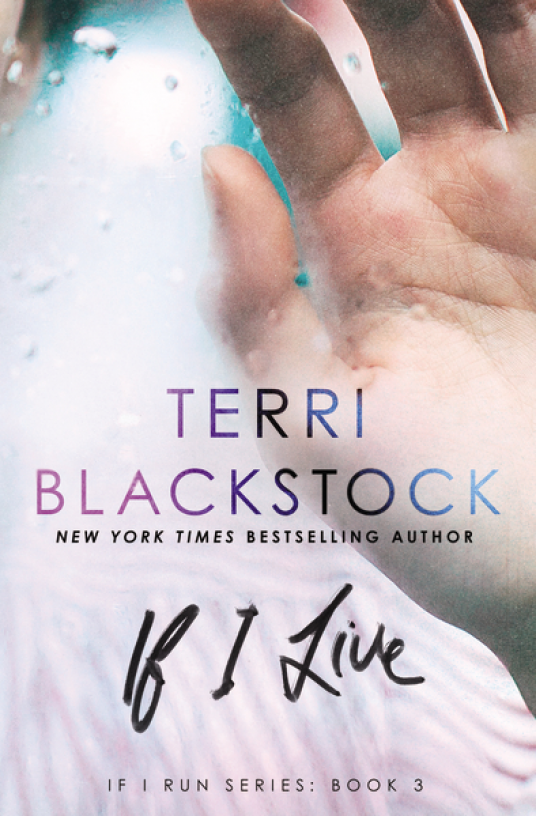 THE HUNT IS ALMOST OVER.

Casey Cox is still on the run after being indicted for murder. The hunt that began with her bloody footprints escalates, and she’s running out of places to hide. Her face is all over the news, and her disguises are no longer enough. It’s only a matter of time before someone recognizes her.

Dylan Roberts, the investigator who once hunted her, is now her only hope. Terrifying attempts on Dylan’s life could force Casey out of hiding. The clock is ticking on both their lives, but exposing the real killers is more complicated than they knew. Amassing the evidence to convict their enemies draws Dylan and Casey together, but their relationship has consequences. Will one life have to be sacrificed to protect the other?

With If I Live, Terri Blackstock takes us on one more heart-stopping chase in the sensational conclusion to the If I Run series.

WOW THIS TRILOGY. This is my exact reaction to my friend at 4 in the morning, after I read book 2 and book 3 in one night.

First of all, I DEFINITELY recommend you reading them in order (in all trilogies, but I feel like if you didn’t read this one in order, it’s impossible to follow the story). All three books in the trilogy flow together SO WELL, not just physically (the covers match to make a picture!) but also story-wise.

The characters are THE BEST. There are points of view from both protagonists as well as the antagonist, and they all go together to paint the full picture and what goes on in the minds of the characters. (ALSO THE SHIP THAT HAPPENS HERE. ITS PRETTY MUCH THE ONLY SHIP THAT I AGREE WITH IN BOOKS)

All the plot twists in this book are amazing!! Halfway through the book, I thought it was about to end, but then A PLOT TWIST HAPPENED. There were so many but it didn’t feel overdone at all.

ALSO SO MUCH ACTION. There was a lot of legal action (aka, stuff that happens at the police station), but as far as I can tell, it’s very realistic and actually makes sense.

The last thing I liked about this book was all the faith content. The first book (and also a little in the second book) didn’t contain so much faith content (which I get, as part of character development), but there was so much in this one, despite all the action, which I really appreciated.

One thing to keep an eye out for is all the violence in the book. As one might expect with a suspense novel, there is a lot of violence, but it might be a little bit much for younger readers or those not comfortable with that violence.

BUT overall? I’M SHOVING THIS TRILOGY AT EVERYONE I SEE. EVERYONE.

Thank you to NetGalley for a free e-copy of this book in exchange for my honest review. I was not required to write a positive review.

2 thoughts on “Book Review: If I Live by Terri Blackstock”